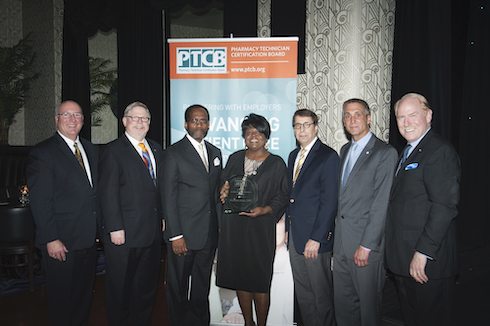 Honoring the 2015 CPhT of the Year, Hortense Jones

A high point of the evening was a special ceremony to honor Hortense Jones (center), the 2015 PTCB CPhT of the Year, when PTCB Executive Director and CEO Everett B. McAllister MPA, RPh (third from left), presented her with a trophy and honorarium. Board of Governors members (left to right) Larry Wagenknecht, BPharm, Scott Meyers, MS, RPh, Paul Abramowitz, PharmD (Chair), Carmen Catizone, BPharm, DPh, and Thomas Menighan, BPharm, MBA, ScD, also joined in the festivities.

The event included a premiere showing of PTCB’s short 20-Year Anniversary film. Guests enjoyed this 4-minute mini-documentary and its candid interviews with CPhTs, pharmacy leaders, and stakeholders who point out expanding technician roles and the growth of PTCB’s Certification Program in the past 20 years.